Zamora, Triple-Jointed Wonder. Major Zamora was a dime museum performer in the late 1890s. Born in St. Johns, Zamora was a physical dwarf who specialized in feats of contortionism and enterology (squeezing into impossibly small spaces, or getting inside a sealed container without disturbing it) and, as an offshoot of this, was a feature escape artist before the advent of Houdini. He was billed, alternately, as “The Triple-jointed Dwarf” and “The Triple-jointed Wonder.” His ad hype claimed he was ‘triple-jointed’ in all the connections of his body. Zamora performed in circus acrobat tights, and sported the large handlebar moustache so common in men’s grooming of the 1890s. Zamora stood 32 inches in height and weighed 54 pounds. Zamora’s features were squeezing himself in and out of an oversized, but still quite small, bottle, and escaping after being tied, chained, handcuffed and locked inside a small, upright box. Zamora is referred to in Panorama of Magic by Milbourne Christopher, and in Learned Pigs and Fireproof Women by Ricky Jay. Zamora married Tina Goughman, who was billed as the “smallest living woman” and was 4 inches taller than the Major. 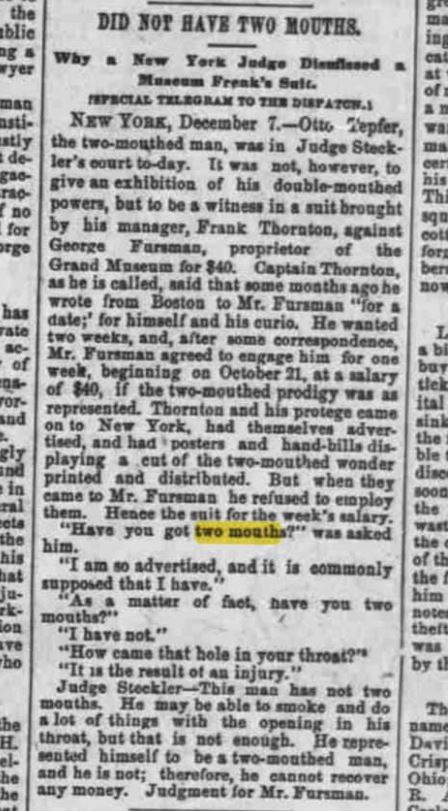 I think this is a young Eugene Berry.

Eugene Berry. I believe his signature is on verso.

Eugene Berry. I believe his signature is on verso.

Unidentified man with his small horse.

With Compliments from Eddie McDonald, the “Flexible Statue.”

Written on verso “L.L. Slingen?, Harrisburg, Pa. 1883. She is a foot writer without any obvious disability. Sign reads “Photographs for Sale.”

Barney Baldwin, Broken Neck Wonder, The only living man in the history of the world with a broken neck.

Barney Baldwin, Broken Neck Wonder, The only living man in the history of the world with a broken neck.

Krao Farini (1876 – 16 April 1926) was an American sideshow performer, who was born with hypertrichosis, who took part in 19th-century exhibition tours in North America and Europe. She was adopted by Guillermo Antonio Farini. On verso is says “Born in Siam Asia Age 16. Forepaugh Circus, 1892. She was billed as the “Missing Link.” There are various stories of her origin which you can find online.

James Morris, the Rubber Man, was born in Copenhagen New York in 1859 and used his unique talent to amuse friends and coworkers from a young age. His ability to stretch his skin as much as eighteen inches from his body, with no perceivable pain, made him incredible popular with officers when he joined the military. Those officers invited reporters and journalists to witness Morris’s unusual talent and from there Morris was recruited by several circuses, sideshow and dime museums. By 1885 he was world traveled and joined up with the Barnum and Bailey Circus. With Barnum and Bailey he was exhibited throughout North America and Europe and in 1898 he was featured in Scientific America as ‘The Rubber Man’. For the journal, he pulled the skin of his neck over his head to which it was reported to resemble ‘an elephant’s trunk’. ‘Rubber Men’ were afflicted with a condition known as cutis hyperelastica or Ehlers-Danlos Syndrome. The syndrome results in a defect in collagen synthesis which in turn results in overly stretchable, and elastic, fragile, soft skin that easily forms welts and scars. While Morris earned good money in his first season with Barnum and Bailey his popularity quickly dwindled and, do to a slight drinking and gambling problem, he took a second job as a barber opening a shop in New York City.

The Solid Muldoon–The Missing Link, 1877. George Hill, perpetrator of the Cardiff Giant, created a new giant measuring 7 feet, 5 inches, weighing 600 lbs., and possessing a four inch tail. This was done with the assistance of a Mr. Fitch, who had patented “Portland Cement.” To fool scientists, they embedded bones from a human skeleton in the concrete, then added a cow’s shinbone to the neck for reinforcement. Hull approached Barnum and the Solid Muldoon was shipped to Barnum’s New York Museum of Anatomy. Fitch confessed the hoax just as “scientists” were ready to cross-section the stomach. At a previous interview before the hoax was discovered, Barnum commented: “It is my candid opinion that in this discovery we have found the missing link which Darwin claims connects mankind with beast creation.” This reference is from Hoaxes, Humbugs, and Spectacles by Mark Sloan, 1990, page 8.

Prof. Nellar breaks a 300 lb. rock on the body of a subject.

Woman hanging from a wire by her hair.